When Steffie was 3 years old she heard the violin for the first time and was sold immediately. Unfortunately, her parents weren’t as excited about her taking lessons as she was. It took her more than a year to convince them she really, really wanted to play the violin. At the age of 10 she switched to the viola and started lessons with Julia Dinerstein. This turned out to be a major turning point in her musical career. The lessons from Julia have helped her to discover how versatile this beautiful instrument is. It inspired her to make playing the viola a career choice. Steffie’s personal highlights, besides the lessons with Julia, have been the masterclasses with the ‘Zemtsov family’: Alexander, Dana and Mikhail Zemtsov. And most inspiring are the additional lessons from the famous violist, Michael Kugel, who taught her that playing the viola is not about making sounds but that it should be a way of communicating with the world.

When Steffie was 11 years old she won the Britten national Viola competition. First prize was a solo performance with the Britten Youth String Orchestra. For her, playing as a soloists with an orchestra was a wonderful experience. In August 2015 she won the competition to become the viola soloists for a number of concerts with the Francigena Chamber Orchestra in Italy. Steffie really enjoys playing with an orchestra for a large audience but she also likes to perform at ‘house concerts’, especially for a public of senior citizens who really enjoy to listen to classical music.

At the age of 6 Steffie started playing in an orchestra and she enjoyed this ever since. Six years later she became first violist of the Young Talent Orchestra of the Rotterdam Conservatory. A few months before her 14th anniversary Steffie auditioned for NJSO (National Dutch String Orchestra) and when she was fifteen she was chosen to be the principal violist for NJSO. With NJSO Steffie has played in projects abroad during the summer holidays. Together they played with famous Dutch musicians like Daniel Rowland, Niek Baar, Mascha van Nieuwkerk and Timora Rosler.

Steffie loves playing chamber music, and even more so when she can play together with her friends. With her good friend Mayte Levenbach she played duets on a number of occasions, since they were both eight years old. In the summer of 2017 Steffie attended a two-week chamber music masterclass given by the well known Jerusalem Quartet and the Cuarteto Casals.
Playing with LGT Young Soloists is for Steffie a combination of all the different aspects she loves about playing the viola: performing as a soloist, chamber music and communicating through music with a group of friends. 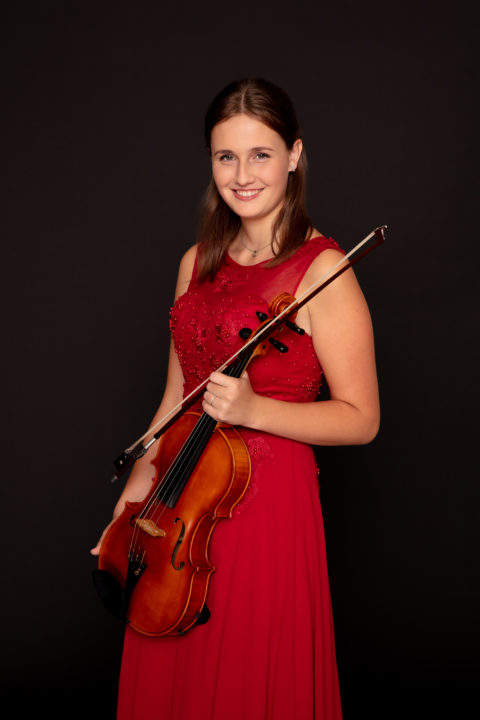